Mark McGrath has always been a touch more self-aware than anyone likes to give him credit for being. This is due, in great part, to almost everything else the lead singer of Sugar Ray is known for. He opened up his last feature in Rolling Stone calling a spade a spade, admitting “I’ve done a lot of douchey things.” I am sure you don’t need to remind Mark McGrath that former bandmates tried to sue him or that SUGAR GAY trends on twitter more often than Sugar Ray ever does.  In the RS piece titled “Mark McGrath: ‘I Understand Why People Don’t Like Me’”, there was only one title that McGrath rebuked, one hit wonder. While critics had spent the entirety of McGrath’s career telling him to enjoy the ride while it lasted, he was gleeful to remind them that despite the odds his fifteen minutes still was not up. 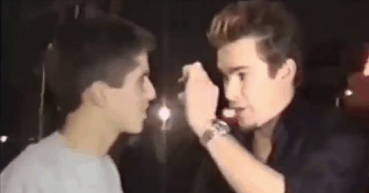 To be fair though there was a time where the one-hit-wonder moniker rang true. In 1997 Sugar Ray dropped their second studio album Floored which Rolling Stone referred to in 1999 quite accurately as cut-rate speed metal. It sounded like a band that found out that Tony Hawk was making a video game and that Motorhead was going to be on the soundtrack and they then cranked out fifteen songs doing their best to make the cut. Nuzzled right at track four was “Fly”, a song McGrath initially hated upon hearing. It was unequivocally selling out, a light breezy reggae inspired track that was the total opposite direction of Sugar Ray’s entire discography at the time. He wrote the lyrics about death, specifically losing a mother, in part so that some nature of the track could reflect how he felt about it. Mark only agreed to put the song out after it became an opportunity to collaborate with Super Cat, a dancehall legend he had been a fan of for some time. Then, before anyone had the opportunity to say or do anything about it, the song ignited the country, spending a full month atop the Billboard 100 charts. And without anything on Floored sounding even a modicum like “Fly” people assumed Sugar Ray’s fate was secure. They were LFO, they were Len, they were OMC, they were a band who just got lucky and had one hit get them their moment in the sun. Mark, however, saw things a little differently. 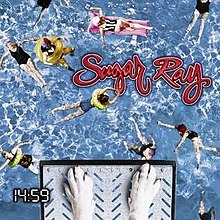 perceived and didn’t have a problem with all of it. In lead up to their follow up album Rolling Stone asked McGrath what people got wrong about Sugar Ray and he said pretty much nothing. “I think people are pretty accurate. The past comments have been “juvenile,” “not great musicians,” “not starting a revolution.” But we’re not trying to be anybody’s lifestyle; we’re just supplementing people’s lifestyle. I believe there’s a niche for bands like us, bands that have a good time and are just happy to be here.” This attitude did not play extremely well with the authenticity obsessed music media at the time and Sugar Ray became a punching bag. To add fuel to the fire McGrath became tabloid fodder and was known more for his debauchery than his music. But the funny thing is Mark was absolutely right, there was more than just a niche for a band like them. Self-aware as ever Sugar Ray decided to name their follow up 14:59 to let every critic know their fifteen minutes weren’t up just yet.

14:59 did a whole lot more than just extend their fifteen minutes of fame, ultimately going triple platinum. The album’s first single “Every Morning” topped the Billboard charts and was the second-best selling song of 1999, and second single “Someday” peaked at seven. These songs continued the breezy summery formula that made “Fly” a success while ditching the reggae for soft rock. Both aged incredibly gracefully, making for as pleasant a listen today as they did twenty years ago. Each is completely inoffensive, light, relaxing rock and roll not pretending to be anything other than what it is. Riding the wave on those tracks also didn’t inhibit the band from enjoying themselves on the rest of the record. They open with one last slice of their hardcore past with New Direction (Intro) bellowing like Lamb of God about how you should be nice to your sister and not play ball in the house, right before moving into “Every Morning”. McGrath also didn’t go completely soft on everyone, doing more or less a Green Day impression on “Aim for Me” and getting KRS-One on “Live and Direct”. They were even able to sneak two tracks onto two of the era’s most important movies, landing “Glory” on the American Pie soundtrack and “Aim for Me” on Max Keeble’s Big Move. Most shockingly critics even came around to the album. NME described the album as a “hellishly difficult record to hate,” and knowing NME they did everything in their power to hate it. Later in their review NME seemed to repeat McGrath’s thesis for the album perfectly, “Not that this is especially inspired stuff, but, if you wanted a soundtrack for the kind of sun-kissed pool-party the sleeve depicts, 14:59 is maybe as good as you could get today.”

In the aforementioned Rolling Stone “Understand Why People Don’t Like Me” piece Mark was talking about Smash Mouth’s Under The Sun tour with the Gin Blossoms and Smash Mouth. Throughout the piece Mark is humble about the success he had and just appreciative to still have the opportunity to play music and make money. While he admits that Sugar Ray didn’t have the catalogue to still be headlining MSG, he feels blessed that bands like his, the Gin Blossoms, and Smash Mouth could come together and still tour all these years later, quite plainly stating, “If I’m still out there singing ‘Fly’ in 30 years, I’ve had a great fucking life.” He goes on to welcome any band in the nineties who have a couple hits to come join him, mentioning that he’d love to have Naughty By Nature or En Vogue to come join him. Funnily enough, Mark forgot to invite Len, LFO, or OMC.

Brendan is the editor in chief of Grandma Sophia's Cookies. He is a writer and comedian based out of New York City who grew up in the suburbs of northern New Jersey. You can find him on twitter and instagram at @hang10higgins View all posts by Brendan P. Higgins